During my one week diet with the teacher plant Ajo Sacha, I had so many lucid dreams that I was astonished. There were by far too many lucid dream experiences to journal on a daily basis, but I did have an MP3 voice recorder which allowed me to record almost every single dream experience upon awakening before the memories would fade. Since I literally had enough lucid dreams to fill a book, I decided to find the major “themes”and “lessons” that Ajo Sacha shared with me during the diet and write about those to give everyone an idea of how the teacher plants actually teach.

Ajo Sacha is known for having quite a sense of humor. The shamans say that she is the gatekeeper to both the dreamworld and the plant kingdom. Likewise, she is famous for testing one’s awareness from time to time to confirm that you have in fact understood her previous lessons before moving on to higher levels of learning.

On the first night of the diet as I was going to sleep I began to see visions of Jessica Simpson in a bikini dancing in front of me. This was so lucid and so vivid that I actually laughed out loud! I woke up and rubbed my eyes because I almost could not believe what was happening. I went back to bed a few minutes later and Jessica was still dancing in front of me in the same bikini, but this time she moved closer. She was very flirtatious and forward with me suggesting with her words and actions that we get to know each other.

As one of requirements of the diet is to refrain from having sex, I recognized fairly quickly that this really was Ajo Sacha appearing to me symbolically. After several minutes of resisting the temptation, Jessica smiled and acknowledged to me that she was Ajo Sacha. She said, “Now that I have your attention, let’s go!”

The next thing I knew the dream changed completely and I was inside a Dunkin Donuts and the waitress asked me what type of donut I wanted. I asked her for a dunkin donut but she replied that they were out of dunkin donuts. I asked for several different types of donuts but they never had any of the ones I wanted. I finally became so irate that I started yelling and screaming! I asked them, “What kind of a dunkin donuts is completely out of donuts?” Then of course I realized the joke as they all began laughing at me. One of the requirements of the diet is not to eat sugar or candy and this too was Ajo Sacha testing my awareness.

The scenery changed again, and this time I was in a bar and the bartender was Gene Simmons from KISS. He did not have his makeup on, but I immediately recognized the symbology of this dream. His character in KISS was “The Demon” and here the demon was right in front of me tempting me with offers of top shelf liquors, the finest wines and cuban cigars. I just laughed at him because I really could not believe all of these dreams were occurring in the same night! As I told him goodbye, he asked me if I was certain that I did not want to join him at an after hours party at the playboy mansion!

I think you can see now why Ajo Sacha is known for her sense of humor.

The temptations ended after the first night, however, Ajo Sacha continued to appear to me as Jessica Simpson and Eva Longoria. In all instances she did this to get my attention. Once I acknowleged her presence and the fact that I knew I was dreaming, she would share another teaching with me.

For example, on the night she appeared to me as Eva Longoria, she was taking a shower in a white room with white candles, white curtains and red roses. As she got out of the shower she asked me to follow her upstairs to her bedroom. The staircase was a beautiful golden spiral staircase. As we reached the top of the staircase the frame of the house disappeared and we were in the clouds flying. As the clouds parted, I could see the heavens and there were white doves flying with us. However, I was unable to fly any higher because I had my laptop computer with me which was weighting me down. Since I use my laptop for work, I would not let go of it even though the doves and Eva (who had now become an angel) were telling me to let the computer go so I could fly higher with them. This dream was one of the most symbolic yet. My laptop computer represents my work which is the main source of stress for me. Not to mention my work on the laptop consumes the majority of my time. My refusal to let go of the laptop was the one thing that currently prevents me from dedicating more time to the dreamworld and shamanic studies.

In the following dream I was in my apartment trying to meditate when I heard noises in the hallway that were so loud that I was unable to concentrate. I went outside to see who was making all of the noise and it was the little kid Damian from all of the Damian Omen horror movies. When he saw me he immediately tried to attack me, but I was so mad at him that I began chasing him down the stairs. This dream was also very symbolic. Damian represented a demon, specifically, my personal demons which prevent me from meditating or doing other things I enjoy. Interestingly, when I confronted him he ran away. For some reason he did not have any of his supernatural powers like in the movies. This theme of confronting demons and illusions was a major teaching from Ajo Sacha that continued in several more dreams.

In my dreams the following night, I was working with an undercover SWAT team and we were chasing the “bad guys” who disappeared into tunnels underground when we showed them our badges. Originally, they appeared to be very dangerous people, in fact, most of the SWAT team was afraid. We all could sense that our captain was nervous and tense so we thought that the bad guys must be really dangerous. Yet when we confronted them with our authority, they ran away without a fight. This dream as well was highly symbolic to me. The things that we fear the most often tend to disappear when we confront them with our personal power.

The following night I had a similar dream of being confronted by very dark energies in an underground warehouse. They were chasing me and trying to shoot me, but slowly I began to awaken and confront them. As I confronted them , they disentegrated like the vampires in the Blade movies. One of the dark energies managed to cut my leg. It was a very deep wound and it was bleeding badly, but I realized that I was dreaming and the leg magically healed like the metal terminator. At this point, I was almost fully lucid and the scenery of the dream changed into a combat video game where I was in control completely. It was a game which I was winning and nothing could really hurt me. Once again, I saw the symbolism being that when we confront our fears they lose their power over us and they go away.

Later, I was on an airplane again with Eva Longoria who was stilled dressed like an angel. She began explaining to me the meaning of the two previous dreams and asked me if I knew what they meant. The song Baby Baby It’s A Wild World by Cat Stevens was playing in the background. The more I thought about it, the more I realized that I was dreaming. She told me that we were always dreaming. She went on to explain that our entire lives really were movies which we were writing the script for on a very unconscious level. She told me this was why vampires died like in the Blade movie and why I healed myself like the terminator. It was just more symbology. She even mentioned that both the SWAT dream and the dream in the underground warehouse were symbolic of the darkest parts of our subconscious minds. This dream was the most incredible to date. I knew everything she had told me was true. I also saw the symbology of being in the airplane with her as indicating that the answer to creating our own movies, or our own script is in developing the ability to control our thoughts (as represented by the Air element). Naturally, if we have a pre-determined destination or goal in mind at the beginning of our journey, our chances of success are much greater (as represented by the airplane, which always has a destination planned well in advance).

At this point in the diet process, I was completely amazed at all of the information I had received from Ajo Sacha. However, I still had one unanswered question. I wanted to know how I could support myself if I were to quit my job. I really wanted to stop working and leave all of the stress and anxiety behind to study more with sacred and medicinal plants in the Amazon and elsewhere, but I just could not understand how that would be possible.

That night I had a dream that I was down near the river. On one side of the river I was with all of the people from my waking world. On the other side of the river were all of the energies and intelligences from the dreamworld. There was a bridge connecting the two sides, but I was the only person who could see the bridge. I spent what seemed to be several days in physical time going to the “other side” and bringing back gifts and art to share with people in the waking world. The most amazing part of this dream in hindsight is that not only was it the answer to my one remaining question, but the symbology showed me how I could make a living doing what I loved simply by sharing my experiences with others whether it be in art, writing books, etc. This was also the only dream I can recall that Ajo Sacha did not appear to me in. I recognized the symbology in this as her confirmation that I had the power within myself to manifest this change in my life.

To say the least, it has taken some time to assimilate and integrate all of the teachings that Ajo Sacha shared with me. She is famous among the natives for cleansing and healing. Whether an individual is suffering consciously or unconsciously, and whether it may be on a physical, mental or spiritual level, Ajo Sacha facilitates a process which allows us to overcome whatever may be blocking us from taking the next step on our personal journey of empowerment and evolution.

In my experiences, as reflected in the symbology of my dreams, she helped me to understand the importance of withstanding the tempations of the physical world, as well as confronting my own personal demons which in reality have proved to be illusions, and she helped me to see clearly how I could manifest the changes in my life that I was seeking.

Most importantly, she helped to realize that we are always dreaming and the only limits to what we can do in our dreams are illusions within our own minds.
Posted by Géraldine Correia 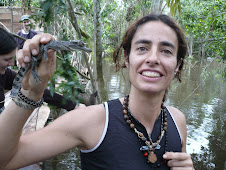